A Brief Essay on Tea Drinking in the Eighteenth Century

By the eighteenth century, tea was already growing in popularity. In 1706, Thomas Twinning opened ‘Tom’s Coffee House’, and was one of the first coffee houses that allowed women to enter and purchase their own tea.  During the first half of the century, tea remained a drink of the upper class. In 1745, the tax on tea was reduced to 1 shilling, following which, “home consumption rose rapidly, from 800,000lb weight in the five-year period from 1741 to 1745 to more than 2,500,00lb from 1746-1750” (Jane Pettigrew, A Social History of Tea, p.40).

Tea was drunk in the same manner, as today, with cream or milk and sugar. The type of sugar and how much was used depended on a person’s wealth. Typically, women were the ones who served the tea, as can be seen in many paintings and art from the period.

There were only a few varieties of tea in the 18th Century, within Europe and the Colonies; Bohea, Pekoe, Hyson and Congo. Bohea tea is the anglicised version of the word Wuyi, being the mountain region where this tea is grown. It is assumed that Bohea is a type of oolong tea. John Ovington, in his work ‘An essay upon the nature and qualities of tea’, 1699, describes Bohea tea as “a little leaf inclining to black, generally tinges the water brown, or of a reddish colour”.

Pekoe tea is described by John Wilkie, in his book ’The Good and Bad Effects of Tea’, 1758, as “The first and best for of Bohea Tea...its leaf is small, and a dark-brown colour, with abundance of small white flowers mixt with it”. Wilkie next describes Congo tea as the second best tea, which has a larger leaf with a darker colour.

Green tea was considered to be an inferior type, with the most popular being Hyson tea; Hyson tea being named after the first merchant of the East India Company to import tea. Despite it being a lower grade of tea (or because of it), it was a very popular variety. John Norton and Sons, who were merchants of London and Virginia, ordered more Hyson tea than any other type in the 18th Century.

A final note from Wilkie, who claims that when someone drinks tea for breakfast it “allays the drought, attenuates viscid humours, blunts and sheaths the pungent darts of sharp, acrid juices, and renders linings of the lungs and pleura, whereby are escaped coughs, pleurisies, consumptions, and many other dangerous and fatal distempers; this pleasant liquor is also a great sweetener and corrector of the blood and is good in all scorbutic and rheumatic complaints: It is good to be taken in all fevers, as it cools, dilutes, and causeth perspiration, and gently encourageth all natural secretions and evacuations.” 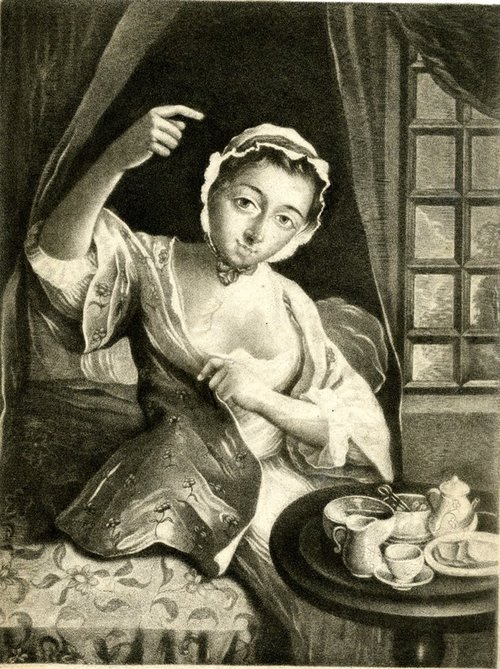 A young woman sitting at her breakfast table, The British Museum

Check out my shop under the heading of literature for numerous reproduction period text on this subject!