Marmalade as we know it within North America and Great Britain isn’t quite the same as that consumed around the world. In fact, the citrus based marmalade often consumed is a late 17th century creation and can even be said to “not be marmalade at all”. Originally developed by the ancient Greeks and Romans, marmalade would have been produced through combining and baking together honey and quince, an apple shaped fruit with a citrus smell and flavour. Without being properly cooked, quince is often unpalatable and rather unpleasant, being far too firm and tart to consume. 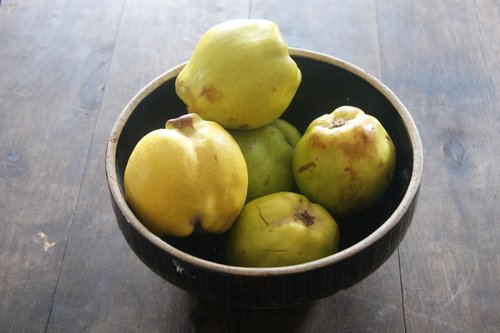 There are over twenty varieties of quince, each with their own scent, flavour shape, but all roughly yellow or green and rather tart if consumed uncooked. Each will provide a rather different marmalade.

For the last millennium, quince has been consumed in large quantities throughout modern day Portugal, making use of a unique recipe and fruit to create the original form of marmalade. Marmalade in fact, obtains its name from the Portuguese word for the fruit, being “marmelo”. The historical ties shared between Portugal and England for over six hundred years has resulted in a significant amount of trade, ideas and food; one such item being that of marmalade, along with the introduction of tea in the 17th century by Queen Catherine of Braganza and “fish and chips” in the 19th century.

Traditional marmalade differs greatly from the more common citrus or orange variety, by being sufficiently firm as to be able to cut with a knife, yet soft enough to spread. Interestingly, owing to the qualities of quince, marmalade maintains a citrus taste and an orange colour. The citrus based variety is often noted as being created within Scotland, after a spoiled shipment of oranges was made into a preserve in an effort to save the fruit and recoup potentially lost profits.

Despite this creation, marmalade as is being discussed herein was far more common within the households of the English population of Great Britain within the 18th century, than that of the citrus variety and in fact, was a common delight consumed by those wealthy enough to purchase it. Thankfully, owing to our Captain being Portuguese (if you haven’t caught on, as of yet), we are able to share with you an extremely old, yet simple recipe for the production of “real marmalade”, as he would put it.

The recipe starts with 1kg of fully peeled, cored and chopped fresh quince fruit. This fruit should be fragrant, but extremely firm; have no regard for minor bruising or odd shapes, as this is normal for the fruit. 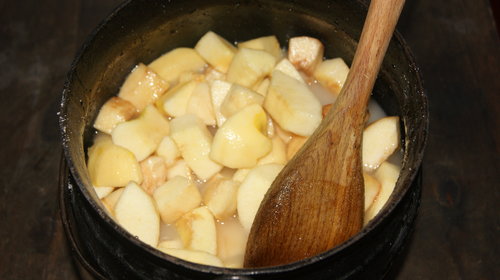 Peeled, cored and chopped quince, with water and sugar.

Next in a sufficiently large pot, add 1kg of refined white granulated sugar to the quince, along with 200ml of water. Combine all of these ingredients and cook over coals, or alternatively over medium heat on a stove top until the fruit is sufficiently tender. 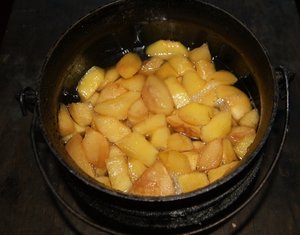 Quince, sugar and water cooked sufficiently until it becomes tender, over the fire with a lovely citrus and smokey scent. 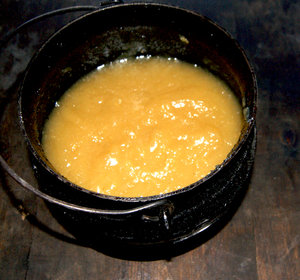 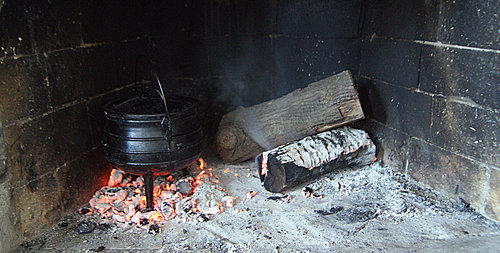 Let the coals do the work for you, place the item to be heated upon the coals, with a trivet if it is missing legs.

When ready, remove the substance from the heat source and immediately ladle into sterilised canning jars and process in a canning bath (submerge the jars) for ten minutes in boiling water. Once cooled and fully set, the marmalade should be thick enough to be sliced with a knife. This cooling and setting period could take anywhere from an hour to three. Alternatively, marmalade was often placed into large containers and allowed to set in ceramic, redware or other such vessels, as well as wooden boxes, as the sugar will permit it to last for quite some time. 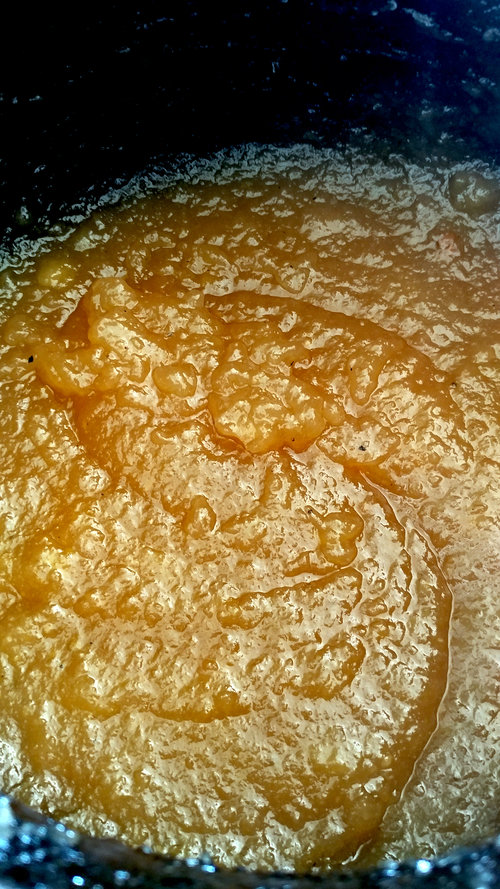 Reduced quince paste, ready to be placed in a container and set into traditional marmalade. As you can see, it is extremely firm and ready to set. 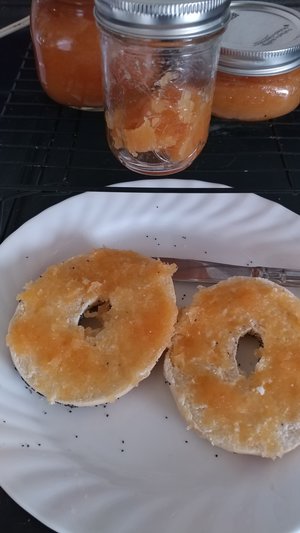 This period treat would be a perfect addition to any 18th century upper class breakfast table, or as an afternoon snack. The expense of importing quince, as well as the sugar, or even the importation of the finished product would have been beyond the means of the average person, yet such an extravagant delight would have been greatly cherished. Note, this item pairs quite well with a soft cheese, such as cream cheese and is absolutely wonderful on toasted bread, crackers or on its own if you have a sweet tooth.

Enjoy this ancient Portuguese treat and let us know what you think of it. Don’t worry, we haven’t forgotten about “fake marmalade”, or “citrus jam” as our Captain often puts it, we will shortly share with you our own recipe for traditional British marmalade, maybe even with a proper “Scottish twist”.