Styles and Methods for Preparing British Military Hair in the Revolution

Today we will be continuing our blog series about hair (and makeup) from the 18th Century and will be going into the hairstyles worn by the British military and its allies. The styles of hair that we see frequently are: a braid, which can be left plain or is sometimes tucked under and fastened with a ribbon, clubbed and a long ponytail that is wrapped with ribbon.  Alternately, a braid may be turned upwards and secured on the upper portion of the head, or on headwear, as seen on several varieties of soldiers.

The following is the information that we have from Cuthbertson’s System on how the hair of a soldier should be treated and worn:

lX. The hair of the Non-commission-officers, Drummers, and private Men, look tightest, when turned up behind on a comb, and loosely* platted, with a black ribband or tape (three quarters long) in a bow knot at the tye, which must never be permitted to be made too close to the head, as such a practice cuts the hair, which should be encouraged, by every means, to be as thick and full as possible, in order to enlarge the appearance of the plat, which thereby looks more ornamental: to promote that end, no fore-top must be allowed, and only as much short hair at the sides, as will make a little turn back, of about an inch and a half in length; when all these aids are not sufficient, from the natural thinness of the hair, a false plat must be added, which, if properly fixt on, can never be discovered: this method is also to be pursued, when a Soldier's hair is but barely long enough to tye, as it will contribute much to the uniform appearance of a Battalion, particularly after having received any number of Recruits.

*A Queue greases the back of the coat, besides being an expense to the Soldier, of above double the quantity of ribband or tape required for the plat.

X. A Soldier must never be allowed to wear a wig, if it can possibly be avoided; but when there is an absolute necessity for so doing, it should be made to imitate the regimental form of dressing the hair, as much as can be: and it should be a rule, to take off the wigs from recruits, whenever the season of the year will admit it, although their hair be ever so short, as even that will look more military than a peasant's wig.

XI. As nothing promotes the growth of hair, more than frequent combing, the Soldiers should be enjoined to accustom themselves to do so, both morning and night, by which they will be under the necessity of undoing their plats, before they go to bed, and thereby prevent the hair from getting, thin, which nothing sooner effects, than a neglect of this precaution : but as Soldiers are not to be depended on in any thing, let it be ever so much for their advantage, the Serjeants and Corporals must often examine into this particular, and insist on a compliance; and it will also be of infinite consequence to the improvement of their hair, to permit them, when not for duty, to appear at morning roll calling, with their hair only tied, and hanging down the back; by which the Officers will be certain of their being combed in a proper manner, at least once a day, which cannot be the case if the hair be platted up.

XII. Pains must be taken to introduce a method of powdering, the mens hair to advantage, that the powder may not be in cakes, on one part more than another, but rather have the appearance of being equally frosted over; for which purpose, it will be right for each Company to appoint a Soldier, who seems to have a taste for it, not only to powder all the men of the Company whenever necessary, but likewise to keep their hair well cut at the sides, and their plats properly done up; for which, and to furnish powder (and shave if required) he should be allowed a * halfpenny per week, from each Non-commission-officer, Drummer, and private Man, with some little exemptions in point of duty: this will be a certain means of ensuring uniformity in the management of the hair of a Battalion and will not be a greater expense to the Soldiers, than if they had furnished powder for themselves.

*The Frisseur by purchasing a quantity of powder gets it cheap, and as he uses it to the best advantage he can afford to serve the Company on those terms.

Taken from the Cuthbertson’s System, for the Complete Interior Management and Economy Battalion of Infantry, 1776 Edition (Pg.110-111)

Note that when Cuthbertson says plat, that means a braid (that term is still used in the UK today).

As you can see, when possible your own hair should be used to make a braid at the back, but it is also very accurate to use a braided queue as well. However, in images from the period, the hair is often shown clubbed rather than braided. The main reason for making use of this method of styling the hair can be attributed to the wishes of King George III, as noted in correspondence to Lord George Lennox on July 27th, 1776 (Courtesy of the 18th Century Material Culture Centre):

“...The King has lately expressed his intentions that the hair of all the infantry should be tied behind in one uniform manner, and that the mode which is commonly called clubbed should be observed. I take the liberty of mentioning this to your Lordship, as what His Majesty wishes, though no order has, as yet, been given out…” 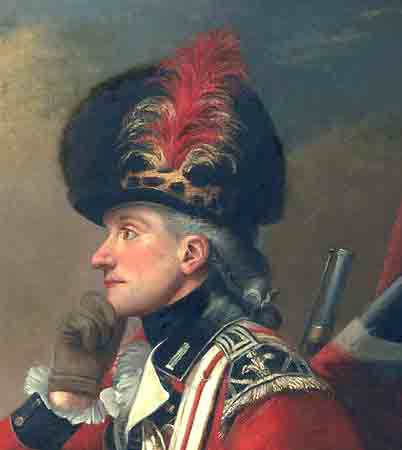 Clubbed Hair - “A soldier called Major John Andre,” - Huntington Library in San Mateo, CA. Historians have determined that this painting is not that of Major John Andre.

The following are several methods that you can use to recreate the correct hair styles of the period:

You should always start with using pomatum to prepare the hair; this will help hold your braid, keep any small hairs from sticking out and give a nice smooth finish to the hair. To make a simple plait, braid the hair at the base of the head, and tie a ribbon at the ends. You can also take the braid and fold it in half and tuck the ends under. Use a ribbon to hold the ends to the top of the braid. Alternatively, you can secure your braid, or plait, to the upper portion of your head by “turning it upwards”, or securing it to your headwear, as in the case for many Pioneers, Grenadiers and Musicians. 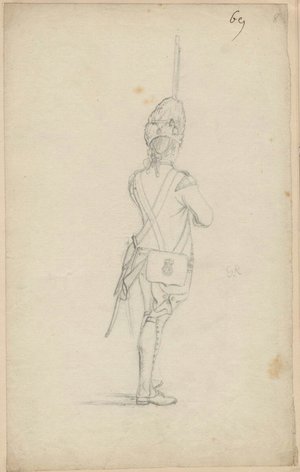 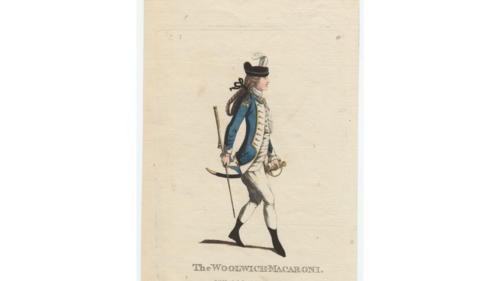 To have wrapped hair, you may at times use a small elastic to secure a ponytail (we don’t necessarily recommend using an elastic, but if you need one to be able to manage your hair while styling, it is one method of achieving this goal) at the base of the hair, tuck a 1" or so ribbon into the elastic. Start wrapping the ribbon around the ponytail on a bit of an angle all the way to the ends and then tuck the ribbon into itself. Make sure you leave some of the hair sticking out at the bottom to attain the look from period images. It appears from my examination of period imagery that the wrapped style of hair is most common in that of the Germanic units. Noted regularly in the von German watercolours of such units within Canada during the American Revolution, these images depict both line and Jaeger units with wrapped hair. Further, images of German units in the Brown University Archive depict numerous soldiers, often Hessian Grenadiers with wrapped hair, such as this image of the von Bose Regiment (thank you to Ian Peplow for sharing his Germanic Regiment images with us). 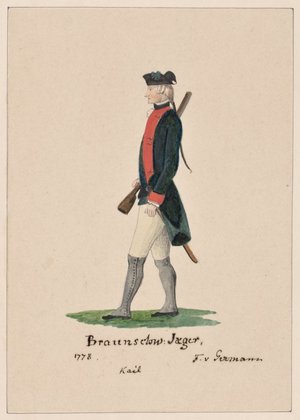 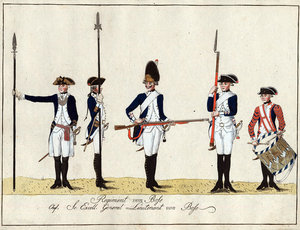 To create clubbed hair, again start with using pomatum on the hair and secure a ponytail at the base of the hair. Fold the ponytail in half with the ends on top of the ponytail and then in half again bringing the first folded edge up the front (making sure the loops covers up the ends so they are not showing). Secure in the middle with a ribbon and cut off the elastic that you used to temporarily hold the ponytail.

This specific style is highly recommended by myself and the Regiment, as this specific style has been detailed in numerous period pieces and became the default style of the British army from the period of 1776 onward, by the decree of the Army (and King George III). Philip de Loutherbourg’s Warley Camp painting accurately and in great detail depicts the use of this style on numerous soldiers, as well as that of the Death of Major Peirson, by John Singleton Copley, a great example of numerous soldiers and officers, close up and with significant detail as to the hair worn by these men. 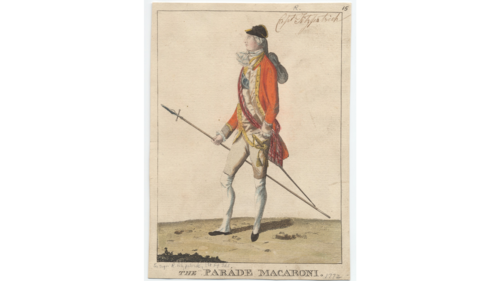 As of recent, I have been spending quite a bit of time getting my new business up and running; being a formally trained tailor, I have just now been able to get back into things with the three kids, but it is getting there. At present, I have been able to add a few period false hair pieces based on the works of Diderot, Cuthbertson and period images. At my new shop, Timbrell Cockburn Cunha, you will be able to find a series of period hair pieces, such as an 8” braided queue and a 16” clubbed queue, which can be restyled into any one of these, both made with real human hair and available in virtually any colour. Feel free to reach out to me personally with any questions that you might have, or through the Regiment.

(These are available within this shop in various colours and lengths, as well as upon demand) 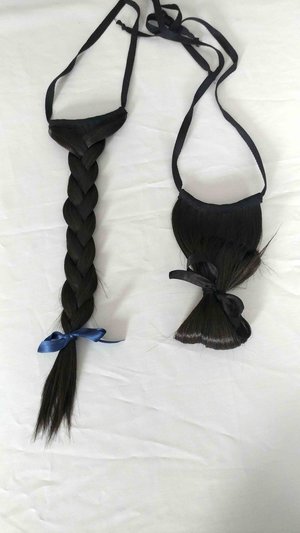 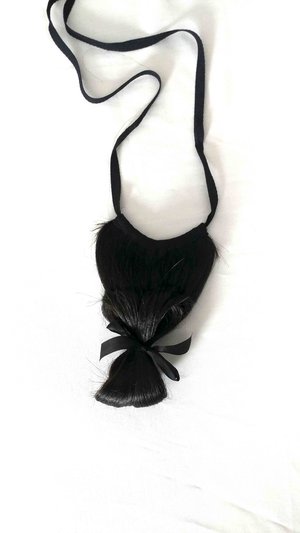 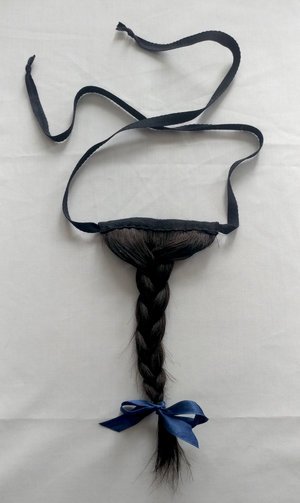